IMAGE Studios® has ranked at #160 for its first ranking in Entrepreneur magazine’s Franchise 500®, the world’s first, best, and most comprehensive franchise ranking. Placement in the Franchise 500® is a highly sought-after honor in the franchise industry, making it one of the company’s most competitive rankings ever. Recognized as an invaluable resource for potential franchisees, Franchise 500® ranks IMAGE Studios® as #160 for its outstanding performance in areas including unit growth, financial strength & stability, and brand power. This is the first year that IMAGE has been ranked and recognized, leapfrogging other franchises into this spot.

“2020 was a challenging year for everyone, but it was also a year of unusual opportunity,” says Jason Feifer, Entrepreneur editor-in-chief. “Franchises were able to be nimble and innovative, serving the needs of franchisees and customers in ways that will resonate for many years to come. We believe that, when we eventually look back on this time, we’ll see it as a moment when many brands defined themselves for the future.”

IMAGE Studios® is a nationwide franchise brand with a real estate model that is revolutionizing the future of the salon industry. Founder and CEO, Jason Olsen commented, “We aren’t the typical real estate investment – our business model produces a Return on Investment (ROI) at 34%+ compared to commercial real estate at 10%> ROI. We area franchise driven by creativity, freedom, and success, for both our franchisees and the health, beauty, and wellness entrepreneurs who build their businesses with IMAGE.” IMAGE Studios® provided entrepreneur opportunities to 364 new business owners in 2020 – with the overwhelming majority being businesses owned by women and minorities.

Over its 42 years in existence, the Franchise 500® has become both a dominant competitive measure for franchisors, and a primary research tool for potential franchisees. IMAGE Studios® position on the ranking is a testament to its strength as a franchise opportunity.

To view IMAGE Studios® in the full ranking, visit www.entrepreneur.com/franchise500. Results can also be seen in the January/February 2021 issue of Entrepreneur, available now on newsstands. 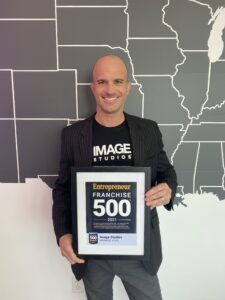 IMAGE Salon Suite Benefits: Be Your Own Boss

7 Things You Can Do To Survive & Thrive This Holiday Season